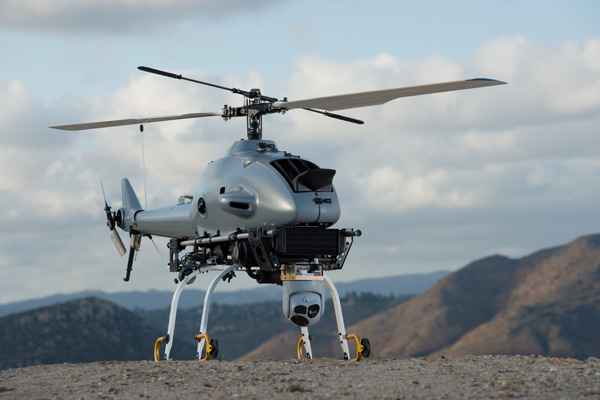 Rotary-Bat (R-Bat) is an autonomous, tactical unmanned helicopter system manufactured by the global defence and technology firm Northrop Grumman. The helicopter is designed to provide a range of intelligence-gathering capabilities to warfighters.

The R-Bat UAV can be deployed to conduct a variety of missions including search-and-rescue, situational awareness, border patrol, tactical intelligence, surveillance, reconnaissance, communications relay and strike. It can also be used for power line inspection and forest fire observation. The helicopter is capable of executing tasks in urban and confined areas.

The aircraft system was demonstrated at the AUVSI Unmanned Systems 2014, held in Orlando, Florida. Northrop Grumman and Yamaha Motor Corporation USA partnered to develop and market the R-Bat helicopter system in May 2014.

The R-Bat airframe is based on the RMAX remotely-piloted unmanned helicopter developed by Yamaha Motor. The RMAX air vehicle is powered by a 246cc two-stroke, liquid cooled engine and is used for industrial and farming applications.

The innovative and small R-Bat unmanned helicopter system features a unique design and is configured with advanced intelligence systems to meet tactical and operational needs. It has increased situational awareness capability and offers superior safety. It can be controlled by a single operator.

The mini aircraft system is fitted with a two-bladed main rotor and a two-bladed tail rotor. The landing gear features two moving wheels and handling grips. The unmanned air system (UAS) can be launched and recovered from confined areas.

The helicopter has an overall length of 3.65m, height of 1.06m and a width of around 720mm. The maximum take-off gross weight is 93kg and has a payload capacity of 19kg. The main rotor diameter is 3.13m, while the tail rotor diameter is 0.53m.

Payloads and sensors fitted to the R-Bat UAS

The R-Bat rotorcraft is equipped with TASE300 imaging payloads, which are stabilised in two axes. The payload systems provide thermal longwave and high-definition imagery for improved surveillance.

The R-Bat UAV can be controlled by a ground control station (GCS) manned by a single operator. A reliable data link is used to transmit real-time imagery and intelligence data gathered by R-Bat to the ground station.

The GCS is equipped with a single laptop / rover to monitor and control the air vehicle’s hub and spoke operations.

The R-Bat tactical UAS has a payload power of 500W. The vehicle can monitor areas up to 80mi away from its take-off location and can operate at a service ceiling of 1,829m. It can continuously execute missions for more than four hours.

The R-Bat small helicopter is part of Northrop Grumman’s scalable Bat small unmanned aircraft systems product line, which is designed to meet the requirements of the US Air Force, Marine Corps, Navy and the Department of Homeland Security. The Bat portfolio is derived from Swift Engineering’s KillerBee platform. The new Bat UAV was unveiled in April 2009 and completed first flight in February 2010.