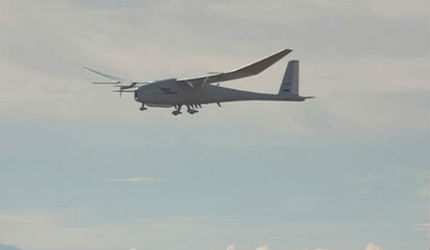 In August 2010 the Global Observer UAS completed its maiden flight at Edwards Air Force Base. The UAS successfully made its historic first flight using a hydrogen-fuelled propulsion system in January 2011.

The Global Observer UAS integrates a highly efficient propulsion system and an extremely lightweight composite airframe made up of minimal layers to achieve weight reduction.

The length and wing spans of the Global Observer are 21.3m and 53.3m respectively. The UAS can carry a payload of up to 180kg. The modular design allows easy integration of various mission-specific payloads.

Designed to deliver long flight endurance at higher altitudes, the UAS can be primarily used in communications relay, and intelligence, surveillance and reconnaissance (ISR) missions performed by the military and homeland security forces. It can also be deployed for disaster relief and maritime surveillance missions.

"The Global Observer UAS integrates a highly efficient propulsion system and an extremely lightweight composite airframe made up of minimal layers to achieve weight reduction."

AeroVironment was awarded a $57m contract by the United States Special Operations Command (USSOCOM) to develop and demonstrate the Global Observer UAS under the Joint Capabilities Technology Demonstration (JCTD) programme, in September 2007. The JCTD programme is aimed at providing an unmanned aircraft platform to deliver persistent ISR and communications relay for the US defence and homeland security forces.

The programme provided funding for the development and production of three unmanned aerial vehicles, flight trials, and joint operational utility assessment (JOUA) with payloads. The programme is sponsored by various US government agencies including US DoD, DHS, US Strategic Command, USSOCOM, US Air Force, US Army, US Coast Guard, and US Defence Threat Reductions Agency.

In 2009 the propulsion system achieved multi-day operation in an atmospheric chamber. The UAS successfully completed ground and taxi testing in May 2010. The wing load tests were completed at NASA Dryden Flight Research Centre in August 2010. The initial flight testing was concluded in October 2010.

The JOUA was conducted at Edwards Air Force Base in 2011.

"It can also be deployed for disaster relief and maritime surveillance missions."

The Global Observer is remotely controlled from the highly portable ground control station (GCS) or the portable launch and recovery element (LRE). The information transmitted by the UAV is received, processed and stored at the GCS. The ground station can retransmit the data to the operations network.

The propulsion system provides a maximum speed of 110kt and an endurance of seven days. The unmanned aircraft can cover an area of up to 600mi in diameter, while flying at stratospheric altitudes between 55,000ft and 65,000ft.

The UAS can be operated from conventional runways with a minimum length and width of 6,000ft and 150ft respectively.

PC-12 NG (Next Generation) is a multimission aircraft manufactured by Pilatus Aircraft.