The Nornen Class patrol vessels operate within 24 nautical miles off the coastal line of Norway. Image courtesy of Vidarlo. 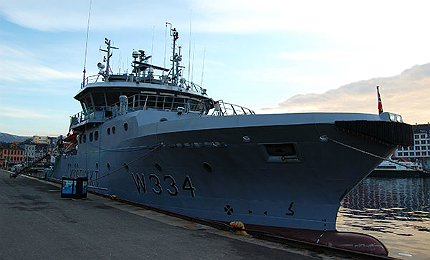 The Nornen Class is designed for deployment in Norwegian coastal waters. The vessels conduct operations within 24 nautical miles of the coastal line of Norway. The primary missions of the vessels include coastal patrol, surveillance and control, fishery protection, oil recovery from spills and assistance to police and customs agencies.

"The Nornen Class is designed for deployment in Norwegian coastal waters."

The contract for five Nornen class patrol vessels was awarded in November 2004. Gryfia shipyard in Szczecin, Poland, built the vessels for Remøy Managment, a company based in Norway, between 2005 and 2007.

Design of the Norwegian patrol vessels

Nornen Class patrol vessels are based on the ST-610 design from Skipsteknisk. The vessels are designed to deliver improved capabilities, such as seaworthiness, towing capacity, oil recovery and fire fighting. Each vessel is provided with an aft deck for accommodating a winch. The patrol vessel has an overall length of 47.2m, moulded breadth of 10.3m and design draft of 3.2m. The depth to main deck is five metres. The displacement of the vessel is 743t. The Nornen Class is manned by 20 crew members.

The deck machinery of Nornen Class includes two anchor winches, two 5t capstans, tugger winch, two cranes and a towing winch with a pulling force of up to 35t. The two cranes can reach a maximum length of 9.88m and can lift a maximum load of 2.7t. The vessels are fitted with Power Management System and DP systems from Kongsberg Maritime.

The safety equipment includes a six metre Fast Rescue Craft (FRC) and a 10.5m Fast Rescue Daughter Craft (FRDC). The boats are launched and recovered by A-frame davit. The Nornen Class is also equipped with portable fire and drainage equipment, as well as fixed oil boom and recovery systems.

The Nornen Class is provided with dedicated tanks for holding 117m³ of fuel oil, 94m³ of fresh water and 155m³ of recovered oil.

"The vessels conduct operations within 24 nautical miles of the coastal line of Norway."

The vessel has an aft work deck area of 100m². The deck load strength is about 2.5t/m². The ship is also equipped with two passive anti-roll tanks and a cargo hold of 90m³.

The accommodation for crew is provided in 12 cabins. The lower ranks of the crew are housed in double cabins, while the higher ranks are accommodated in six individual cabins. The vessel also offers two common rooms, a mess room, a hospital, a fitness room, a laundry, office room, operation centre and a crypto room.

The stern thrusters of 1,100kW are fitted with two frequency controlled electric motors. The Wärtsilä tunnel thruster fitted to the bow of the vessel delivers a power of 300kW. The propulsion system provides a maximum speed of 16kt.