The lead ship in the Barentshav Class, NoCGV Barentshav (W340), stationed at port in Longyearbyen, Svalbard. Image courtesy of Bjoertvedt. 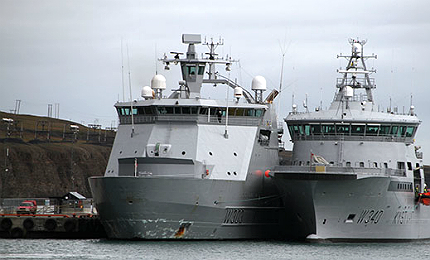 Barentshav Class offshore patrol vessels (OPV) are in service with the Royal Norwegian Coast Guard (RNoCG). Built by Myklebust Verft, the OPVs are operated by Remoy Management under a long-term lease agreement with the RNoCG. The Barentshav Class replaced the Chieftain, Tromsø and Stålbas OPVs.

In March 2006, Remoy Management placed a contract with Myklebust Verft for the first Barentshav offshore patrol vessel. Myklebust received a contract for the second OPV in May 2006. The third and final OPV was ordered in December 2006.

Barentshav Class is based on the design of VS 794 CGV from Vik-Sandvik. The design incorporates a mono-hull supplied by Severnav Shipyard, Romania. The hull integrates a bulbous bow and two-fold shell with double bottom. It is also provided with a roll reduction tank and side tanks.

The OPV has a length of 93m, moulded breadth of 16.6m and free sailing draft of 28m. The gross tonnage of the Barentshav Class is 3,100t. Each OPV can be operated by a standard crew of 16 people.

Deck equipment and systems of the Norwegian vessels

The bow deck of the Barentshav Class is mounted with a Bofors 40mm gun. Two single point davits are provided for launching and recovering two man overboard boats (MOBs). Three inflatable life rafts can be launched from the racks at port and starboard side of the OPV.

The Barentshav Class vessels are also equipped with a Nato submarine rescue system.

"The bow deck of the Barentshav Class is mounted with a Bofors 40mm gun."

Barentshav Class OPVs are equipped with a hybrid propulsion system. The propulsion integrates a Bergen B32 diesel engine, electric propulsion motor, gas powered generator sets and a controllable pitch (CP) propeller. The conventional CP propeller is driven by a main engine or combined electric motor / shaft generator driven by gas-fuelled generators. The hybrid configuration allows the two systems to drive the propeller at the same time.

The high manoeuvrability is provided through side thrusters in forward and aft and an azimuth thruster in forward. The hybrid propulsion system provides a maximum speed of 20kt. It is intended to reduce CO2 emissions by 25%, NOx emissions by 90% and fuel costs by 25%.

The Legend-Class National Security Cutters (NSCs) are a new class of vessels in service with the US Coast Guard. The NSCs are primarily intended for maritime homeland security and coastal defence missions.