A Leco BearCat of the Metropolitan Nashville Police Department. Image courtesy of Sdlewis. 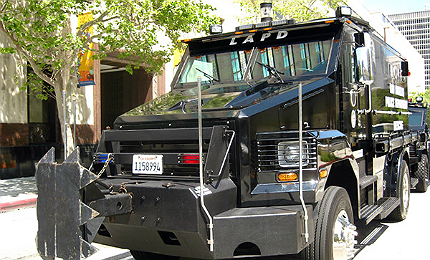 US and international operators

The BearCat is in service with the US military operators, including the US Air Force, Marine Corps Security Force Regiment, the US Army and the US Navy.

The BearCat vehicles are also operated by US Federal Law Enforcement Agencies, such as the US Department of Energy, the US Park Police, Kennedy Space Centre – Emergency Response Team, National Security Agency, the US Marshals Service, the US Department of State, the US Capitol Police and the Bureau of Alcohol, Tobacco, Firearms and Explosives.

BearCat vehicles were also exported to Canada, Morocco and the Netherlands.

Variants of the armoured vehicle

The BearCat is based on the Ford F-550 heavy-duty commercial truck chassis. The conventional layout houses the engine in the front, crew seating in the middle and troop section at the rear.

"The BearCat is optionally fitted with a roof-mounted turret or common remotely operated weapon station (CROWS)."

The hull is made of Mil-Spec steel armour, incorporating bullet-proof glass windows. The vehicle can accommodate up to 12 personnel.

The BearCat is optionally fitted with a roof-mounted turret or common remotely operated weapon station (CROWS). The turret can be armed with a wide range of weapon systems, including M60, M240 machine guns and other light machine guns.

The vehicle variants are equipped with under body V-hull blast shields, NIJ Level IV armour and blast seats. The base vehicle can protect the crew from 7.62mm small arms ammunition and Nato rounds.

The protection levels can be upgraded to withstand .50 calibre BMG rounds or 7.62mm armour piercing rounds. The V-hull equipped vehicles can survive grenade and IED attacks. The BearCat can be optionally equipped with chemical, biological, radiological, nuclear and explosives (CBRNE) protection.

Engine and mobility of Lenco’s BearCat

The BearCat armoured vehicles are powered by a 6.4L V-8 twin turbo diesel engine coupled to the automatic OD or manual transmission. The engine develops a power output of 350hp at 3,000rpm. It generates a 650ft/lb torque at 2,000rpm.

BearCat is a four-wheel drive vehicle capable of operating in cross-country conditions. The vehicle can negotiate a side slope of 330 and gradient of 600. The approach and departure angles of the vehicle are 410 and 250 respectively. BearCat has a maximum on-road speed of 145km/h.