CCGS Private Robertson, V.C. is the lead ship of the Hero Class MSPV. Image courtesy of Fisheries and Oceans Canada.

The Hero Class MSPVs are being built at the Halifax Shipyard of Irving Shipbuilding. Image courtesy of Fisheries and Oceans Canada.

The Hero Class MSPV has a maximum speed of 25kt. Image courtesy of Fisheries and Oceans Canada. 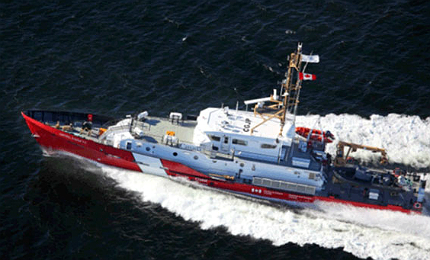 Hero Class Mid-Shore Patrol Vessels (MSPVs) are being built by Irving Shipbuilding for use by the Canadian Coast Guard (CCG). The vessels are named after personnel from the Royal Canadian Mounted Police (RCMP), Canadian Coast Guard, Department of Fisheries and Oceans and Canadian Forces.

The Hero Class MSPVs are positioned to conduct maritime security, search and rescue, fisheries enforcement, anti-smuggling and maritime patrol missions on Canadian waters. The new vessels are equipped with more advanced capabilities than the existing boats used for these missions.

In September 2009, the Government of Canada placed a $194m contract with Irving Shipbuilding for nine mid-shore patrol vessels.

The vessels were acquired as part of the CCG’s long-term fleet replenishment initiative. Damen was engaged to deliver the basic design for Irving Shipbuilding. The final design review was concluded in spring 2010.

Design of the CCG’s vessels

"In September 2009, the Government of Canada placed a $194m contract with Irving Shipbuilding for nine mid-shore patrol vessels."

The Hero Class is based on the Damen Stan Patrol 4207 design. The hull is made of steel and the superstructure is built using aluminium. The Hero Class was designed to deliver higher speeds and superior sea-keeping capabilities.

The MSPV has a length of 43m, beam of seven metres and a draft of 2.85m. The displacement of the ship is 257t. Each ship can carry eight crew members and up to six officers from RCMP or the Department of Fisheries.

The boats are launched / recovered using davits and a hydraulic hoist. Each vessel is also equipped with communications systems to interoperate with other Coast Guard vessels. 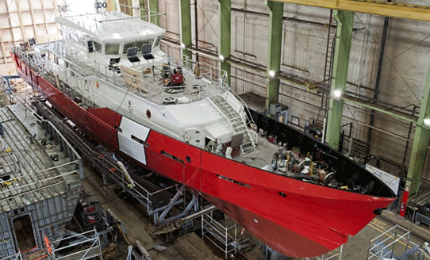 The first steel was cut for the lead vessel in class, CCGS Private Robertson V.C., at the Halifax Shipyard in September 2010. The ship was launched in May 2012 and delivered to the CCG in July 2012.

The construction of CCGS Caporal Kaeble V.C started with the steel cutting ceremony, which was held in winter 2011. The ship was delivered to the Coast Guard in November 2012.

The construction of the third vessel, CCGS Corporal Teather C.V., began in summer 2011. The vessel is scheduled to be delivered in winter 2013. The remaining vessels are in various stages of construction at the shipyard. The delivery of the final vessel will conclude by 2014.

Hero Class MSPVs will serve as a primary vessel platform for the joint programme of the Canadian Coast Guard and the RCMP Marine Security Enforcement Team.

"The vessels were acquired as part of the CCG’s long-term fleet replenishment initiative."

Four ships assigned to the programme are deployed in the Great Lakes and the St. Lawrence Seaway. These ships will enhance the maritime security and support CCG and RCMP staff in addressing potential threats and water enforcement requirements.

The primary missions include surveillance of fisheries operations, control of illegal fishing equipment and illegal fish poaching, as well as anti-smuggling. The ships will also monitor and patrol the coastlines and international limits to demonstrate the Canadian presence.

Endurance of the CCG’s MSPVs

The Hero Class is powered by two Caterpillar diesel engines driving a pair of controllable pitch propellers. The engines develop a power output of 4,992kW. The propulsion system provides a cruising speed of 14kt and a maximum speed of 25kt.

The mid-shore patrol vessels have a range of 2,000nmi at an average speed of 14kt. The vessels can endure at sea for two weeks. The high-speed and long-rage capabilities of the vessels allow for extended operations in difficult weather conditions.