The F406 aircraft of the Hellenic Coast Guard is based at Dekelia Tatoi Airport. Image courtesy of Jerry Gunner. 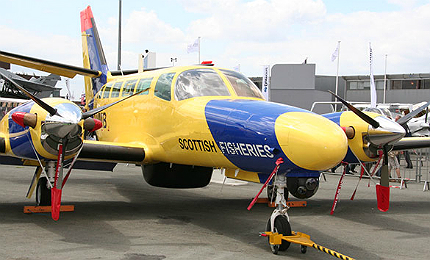 The F406 is a light turboprop aircraft produced by GECI Aviation (formerly Reims Aviation Industries), a subsidiary of GECI International. The aircraft is intended for use in maritime surveillance, national security, pollution control and passenger and cargo transport missions.

The F406 aircraft made its first flight in September 1983. About 100 aircraft were delivered to the customers by December 2011.

"The F406 aircraft made its first flight in September 1983. About 100 aircraft were delivered to the customers by December 2011."

The F406 is delivered in Surmar (maritime surveillance), Polmar (maritime pollution) and commuter configurations. The Surmar version is equipped with radar and surveillance systems, in order to conduct search and rescue (SAR) and drug interdiction, as well as to control illegal immigration and fishing activities.

The Polmar variant features an Ericson or Terra side-looking airborne radar (SLAR) and a Sagem Cyclope 2000 IR linescanner to detect and map oil slicks and polluted areas respectively. The commuter version is equipped with seating for 12 passengers. The aircraft can be configured for mixed passenger / freight role.

The F406 aircraft features a low-wing cantilever design integrating a conventional metal airframe made of aluminium and steel materials. The fuselage is attached with wing centre section, two-spar outer wings and cruciform tail.

The aircraft is designed to carry two crew and 12 passengers. The cabin is provided with large windows and a cargo door which allows the loading / unloading of freight. The under fuselage is fitted with a cargo pod for the carriage of additional cargo.

The cockpit accommodates two crew, including a pilot and a co-pilot. It is equipped with Honeywell Bendix/King Silver Crown avionics suite integrating communication and navigation systems, glideslope, dual ADF and marker beacon receiver. The aircraft can be optionally provided with Gold Crown avionics and autopilot system.

The surveillance variants are equipped with a CPT-159 very low light surveillance system supplied by Caledonian Airborne System. The CPT-159 system consists of a camera platform, central line replaceable unit, illuminator, a multifunction grip / joystick and interface unit and two flat panel displays. It allows the identification of vessels by recording their registration during day and night.

The F406 aircraft offers a spacious and flexible cabin layout providing a high degree of comfort for passengers.

The cabin layout can be modified to conduct medical evacuation and cargo transport missions. The aircraft is also provided with a cargo door, cargo pod and nose baggage compartment to complement these missions.

The F406 aircraft is powered by two Pratt & Whitney Canada PT6A-112 turboprops, driving two McCauley three-bladed, reversible-pitch metal propellers. The engines are equipped with three-stage axial and single-stage centrifugal compressors. Each engine develops a maximum rated power of 500shp. Fuel capacity is 1,823L, of which 1,798L is the usable capacity.

The F406 is fitted with hydraulically retractable tricycle type landing gear. Each unit is equipped with a single wheel. The main units retract inward into wing, whereas the nose unit retracts rearward. The units are fitted with oleo-pneumatic shock-absorbers.