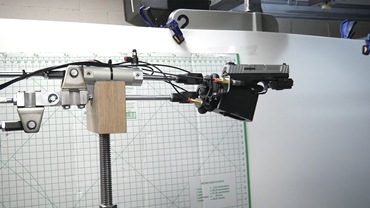 The US Department of Homeland Security’s (DHS) Science and Technology Directorate (S&T) has developed a new system to eliminate debilitating stress injuries and chronic nerve and joint pain suffered by personnel while test firing thousands of ammunition rounds.

Consisting of three major components designed to mimic a human firer, the Virtual Shooter prototype has been developed with the help of agents from the US Immigration and Customs Enforcement (ICE) Office of Firearms and Tactical Programs (OFTP) Armory Operations Branch (AOB).

The system features a mechanical arm and hand that mirrors major human bone and muscular structure, and air cylinders replicating muscles that aim and resist recoil forces in the wrist, forearm, upper arm, and shoulder. A pressurised backboard mount simulates the shooter’s torso.

"This equates to testing more than 200,000 rounds of ammunition and a variety of handguns annually before they are approved for use in the field.

"This repetitive firing takes a toll on the shooters and results in stressed joints, debilitating pain, and other physical injuries.

"The Virtual Shooter absorbs the impacts and prevents injuries, and the AOB agents can observe how the weapons and ammunition perform."

In March 2014, the Virtual Shooter was demonstrated at the ICE OFTP’s armoury in Altoona, Pennsylvania, US, enabling AOB agents to evaluate multiple weapons and ammunition.

The event demonstrated single- and a double-armed model that fired multiple handgun and ammunition types.

After completion of the demonstration, the AOB agents kept the double-armed model as it more closely approximates their firing methods, and plans to use the prototype until the final product is ready.

Radiance Technologies is scheduled to develop and deliver the second and final prototype to the ICE OFTP AOB in the near future and the model will then be available commercially for government and industry use.