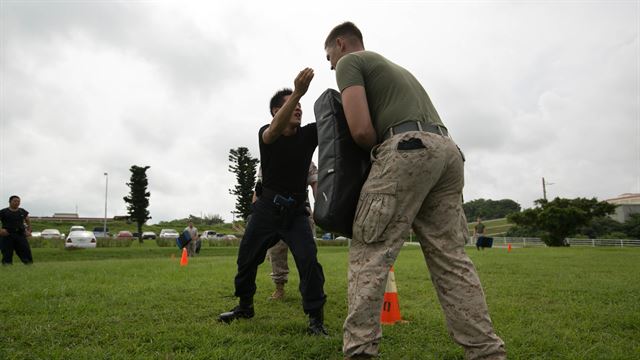 Conducted at Camp Foster in Okinawa, Japan, the training saw Marines from the mobile training team, PMO, MCB Camp Butler, Marine Corps Installations Pacific, instill the knowledge and skills in JSGs that are needed to use the correct escalation of force when arresting suspects.

Delekto said: "The JSGs receive the same training Marine military policemen receive. This training prepares them for real-life scenarios where an escalation of force is required, but lethal force is not."

The training also made JSGs learn the real world capabilities of OC spray, which is created using cayenne pepper as a base ingredient.

After receiving a hefty dose of the spray, the JSGs navigated through an obstacle course of marines representing potential suspects.

Delekto added: "When using OC spray there is a high probability of a military policemen or JSG (coming in contact) with it. They must learn to remain in control despite the fact that they (have been exposed)."

The PMO and JSGs have been working jointly to ensure the safety of the service members, civilians and families who live and work aboard Marine Corps Base Camp Butler, since 1972.