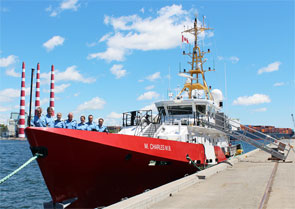 Representing the eighth of nine Hero-class vessels to join the Coast Guard fleet, M. Charles M.B., will be used to support the Department of Fisheries (DFO) and Oceans Conservation and Protection programmes and also support search and rescue missions on Canada’s west coast.

The vessel would be based in Sidney and will be jointly crewed by the Coast Guard and DFO Conservation and Protection staff.

Canadian Senator Nancy Greene Raine said: "Our Government is proud to welcome CCGS M. Charles M.B. to our fleet and to honour the memory of Seaman Charles who devoted his life and career to saving lives.

Get the free report

"This Government has made unprecedented investments in the renewal of the Canadian Coast Guard fleet.

"Our robust fleet in the Western region helps the dedicated men and women of the Coast Guard in their crucial role of protecting those who make a living on the sea and our fisheries and oceans."

Constructed in Halifax, Nova Scotia, by Irving Shipbuilding, the Hero-class vessels are 43m in length with a displacement of 257t and a top speed of 25k, and can communicate securely with other Canadian Government vessels and national classified command and control networks.

The Hero-class vessels are named after decorated soldiers, veterans and police officers as well as employees of Fisheries and Oceans Canada and the Canadian Coast Guard.

Since 2009, the Canadian Government has delivered several new vessels to the Coast Guard, including a hovercraft, search and rescue lifeboats, specialty vessels, near-shore fishery research vessels, environmental barges, and small craft, in addition to MSPVs.

Image: M. Charles M.B., will be used to support the DFO and Oceans Conservation and Protection programmes and search and rescue missions on Canada’s west coast. Photo: courtesy of the Government of Canada.