The Republic of Mauritius

A top angle view of the aunav.NEXT robotic vehicle.

The aunav.NEXT is an ideal robot for Special Forces, and Explosive Ordnance Disposal (EOD) units in the war against terrorism. 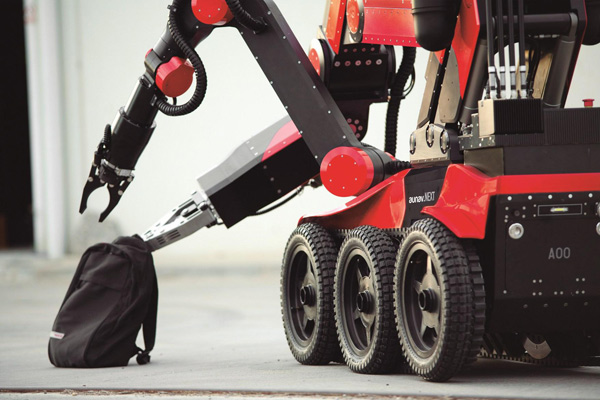 aunav.NEXT is a robotic vehicle designed and developed by Spanish company Proytecsa to neutralise explosive ordnances, Improvised Explosive Devices (IEDs), and chemical, biological, radiological and nuclear (CBRN) threats. It can be primarily deployed by the special forces and Explosive Ordnance Disposal (EOD) units in the war against terrorism.

The robot is robust, extremely powerful and has superior mobility characteristics making it an ideal robot for military, and police EOD and counter-IED missions.

The aunav.NEXT is one of the "aunav" series of EOD robots developed in conjunction with the TEDAX unit of the Spanish Policía Nacional. It was displayed for the first time at the MILIPOL International Security and Defence show held in Paris in November 2013.

The Republic of Mauritius purchased an aunav.NEXT robot from Proytecsa in March 2014. The robot is used for the de-activation of explosives devices.

XRD 3500 is an explosives detection system (EDS) manufactured by Morpho Detection, part of the Safran Group.

The aunav family of robots produced by Proytecsa are in service with the Policía Nacional, the Guardia Civil, the Air Force and the Mossos d’Esquadra. Additionally, numerous bomb disposal units in Angola, Mexico, Morocco, Saudi Arabia, Spain and the US operate aunav robots.

Design and features of aunav.NEXT robot

The aunav.NEXT is made of ruggedised aluminium, ultraviolet (UV) technical plastics and composites. It incorporates aerospace-grade components for high levels of robustness and reliability during critical missions. The robot’s sleek design further minimises the potential damage created by blasts.

The latest equipment and technologies used in the robot allow it to perform missions in the most challenging missions. The robot measures 1.55m in length, 0.69m in width and 1.15m in height. It has a maximum weight of 495kg.

aunav.NEXT is the first EOD robotic vehicle to feature two articulated arms. This feature allows special functions and milli-metric motions, which none of its present contenders can execute.

The primary arm includes four articulated sections with varied dimensions. The arm can extend to a length of 2.03m, while its effective extension towards the surface is 1.86m. It can reach a vertical distance of 3.22m. The arm has the lifting capacity of 100kg when extended, while it can lift up to 200kg when folded.

The secondary arm equipped with three articulated sections can reach a maximum distance of 2.22m. Each arm installed on the turret with 360º rotation capability provides full motion in virtually confined places.

The second arm and the uninterrupted revolving manipulator (main arm) fitted to the robot ensure superior manoeuvrability than other robots in its class.

Operation and control of the robot

The aunav.NEXT robot is operated and controlled by a portable control centre and gamepad. The operator console features a sunlight readable 17in LCD screen and 8in touch screen. The robot is connected to the control centre via Coded Orthogonal Frequency Division Multiplexing (COFDM), which is a modulation radio scheme using 400MHz – 2.7GHz and 4GHz to 6GHz frequencies.

The robot can be remotely operated to a maximum range of 700m in urban areas and 3km in open fields. It can conduct missions for up to five hours and is incorporated with pre-programmed movements for better handling and ease of operation.

The robot features a dual permanent traction system integrating dual wheels and Caterpillar tracks. It can run over all terrain types including snow, mud and sand.

The robot can climb stairs at an angle of up to 45°. It can also be fitted with ATV-type wheels for high mobility over rough terrains.