The Dornier 228 NG is an ideal platform for military and government law enforcement agencies. Image courtesy of RUAG Aviation. 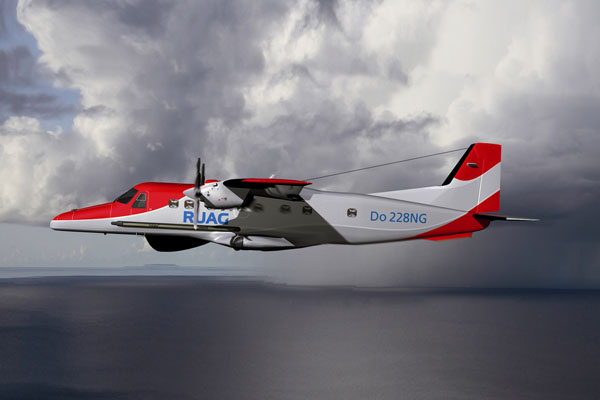 The Dornier 228 NG (new generation) special mission aircraft is produced by RUAG Aviation, for military and government law enforcement customers. The 228 NG is an improved, re-launched variant based on the Dornier 228 aircraft. The variant integrates advanced equipment and systems for conducting special mission operations.

The Do 228 NG aircraft was unveiled in 2007 and received extended type certification from the European Aviation Safety Agency (EASA) in August 2010. RUAG is responsible for the final assembly, payload integration, testing, and delivery of the aircraft. The wings and tail sections are supplied by Hindustan Aeronautics (HAL), based in India.

The Do 228NG incorporates a high-wing monoplane design. The rectangular-shaped fuselage of the aircraft offers enough space for passenger and cargo transportation, and allows the integration of sensor platforms for special missions.

"Since the Do 228NG was designed and certified as a multirole aircraft, it meets the challenging requirements of customer-specific missions and commuter operators."

Since the Do 228NG was designed and certified as a multirole aircraft, it meets the challenging requirements of customer-specific missions and commuter operators. The aircraft measures 16.56m in length and 4.86m in height. It has a wing span of 16.97m. The maximum take-off weight of the aircraft is 6,400kg. The special mission aircraft can carry a payload of approximately 2,000kg.

Cockpit features of the Do 228 NG

The Do 228 NG is equipped with a state-of-the-art glass cockpit accommodating two crew members. The cockpit integrates four multi-function displays and a standard flight management system (FMS).The FMS stores data of up to 200 missions and can guide the pilots to execute the perfect search mission. The data can be updated every 28 days to assure cutting-edge data onboard. The cockpit can be optionally fitted with a terrain awareness warning system (TAWS).

Four sunlight-readable, large, universal displays present the data required for each phase of flight. The outboard flight displays provide the information that is essential for handling the aircraft. The pilots are provided with the status of onboard systems, airport charts, navigation and terrain details, and sensor imagery of the operator’s console.

Cabin features of Do 228 next generation aircraft

The large cabin can be configured to include bubble windows, two operator consoles, and two observer positions for special missions. The unpressurised fuselage allows the installation of external sensors including 360° radar with a range of 120nmi, forward looking infrared (FLIR) system or side-looking airborne radar (SLAR).

"The FMS stores data of up to 200 missions and can guide the pilots to execute the perfect search mission."

Modification of the cabin configuration can create room for cargo/passenger transportation, and integration of special mission racks and cabinets.

The work stations aboard the cabin are equipped with special software for analysing, processing and storing of data. The large cargo door allows loading and unloading of cargo as well as equipment for securing the cargo in baggage area.

Do 228 NG engine and performance

The Dornier 228 NG is powered by two Honeywell TPE331-10 turboprop engines driving five bladed propellers. Each engine develops a maximum continuous power of 776shp. The propellers are made of composite materials to reduce weight, noise and vibration levels.

The special mission aircraft can perform takeoff and landings on short runways. It operates at high altitudes in high temperatures. It requires a takeoff distance of 793m and landing distance of 558m.

PC-12 NG (Next Generation) is a multimission aircraft manufactured by Pilatus Aircraft.