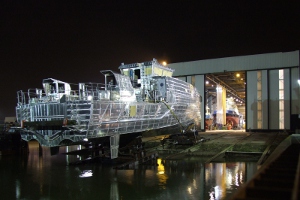 The latest vessel is one of the nine vessels ordered by the Royal Bahamas Defence Force, which comprising four Stan Patrol 4207 vessels; one RoRo 5612; in addition to three Stan Patrol 3007 vessels.

"For that reason we have developed the Stan Patrol 3007 to reach up to 24 knots with shallow draught.

Designed as per clients’ requirements, the long range Stan Patrol 3007 vessel features a recess in the aft ship to house a rigid inflatable boat (RIB), with high-speed capabilities.

"It features a water jet, a new engine system and a propulsion arrangement designed for optimal performance and reliability. She will be able to make speeds over 30 knots."

Aimed at remaining at sea for up to a week at a time, the Stan Patrol 3007 boasts on board accommodation for a crew of 13 members, in addition to a pantry and mess room.

Van der Zon said: "Over a period of approximately 15 weeks, we will install on board all machinery, electrical installations, HVAC, navigational equipment, insulation and carpentry.

Upon the completion of scheduled sea trials and extensive testing the first Stan Patrol 3007 is set for delivery in week 26 of 2015.

After receiving the vessel, the vessel’s crew will go through training in the Netherlands, prior to the vessel’s delivery to the Bahamas.