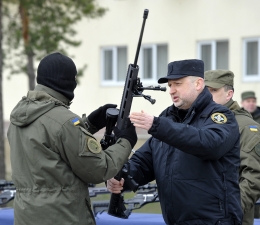 Ukraine’s state enterprise Ukroboronservice has delivered new experimental sniper rifles to the soldiers of the National Guard of Ukraine.

The company delivered a total of ten rifles Snipers Training Centre of the military unit of the Ukranian National Guard.

Equipped with a telescopic buttstock, the new rifle is capable of delivering individual fire with sighting range of about 1200m.

Developed on the basis of barrel and breech-mechanism, the 4.5kg rifle is capable of firing at an initial rate of 870m/s, and has the maximum range is 3km.

Additionally, it features a silencer that reduces shot loudness to 26 decibels.

Ukrainian National Security and Defence Council (NSDC) Secretary Oleksandr Turchynov said: "Today, domestic enterprises are providing the Armed Forces of Ukraine and the National Guard of Ukraine with heavy military weapons and equipment, as well as with a wide range of high-quality small arms."

Designated BTS-5B, the new towing vehicle is equipped with a powerful four-stroke engine that provides a maximum speed of over 60km/h and a 700km cruising range.

The vehicle has been armed with 12.7calibre and AKS-74 machine guns, as well as rocket-propelled grenades.

It is capable of lifting loads, digging, welding and performing technical support of tank units in adverse locations.

Image: The new rifle is capable of delivering individual fire with sighting range of about 1200m. Photo: courtesy of Ukroboronprom.