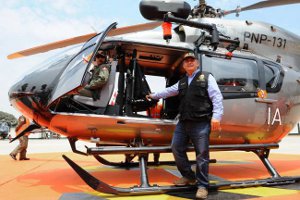 Airbus has delivered the last EC145 helicopter to the National Police of Peru (PNP), which is the fifth under a contract aimed at modernising the agency’s helicopter fleet.

The initial four aircraft, which have been deployed on a wide range of missions, have accumulated more than 800 flying hours.

Further, helicopters have been assisting PNP in executing surveillance operations and support for parapublic missions, in addition to ballet against illegal mining in the Madre de Dios region on Bolivia and Brazilian borders.

Over 20 sea rescue and MEDEVAC missions have also been completed by the helicopters in Lima and Callao.

As part of the programme, Airbus Helicopters was also responsible for the technology transfer programme involving training for over 14 pilots and 20 technicians of the PNP.

The light twin-engine offers payload capacity of over 1.7t and a range of 370nm, while accommodating up to 10 passengers.

Features of EC145 helicopters include PA systems, a siren and multi-frequency radios for hub-and-spoke communications, in addition to a latest infrared camera equipped on one of the aircraft, which generates live images to the command centre or ground units.

PNP, together with French Gendarmerie, has been executing an operational exchange programme to deliver complete training on the tactical deployments of these next-generation aircraft, as part ofn earlier signed deal between France and Peru.