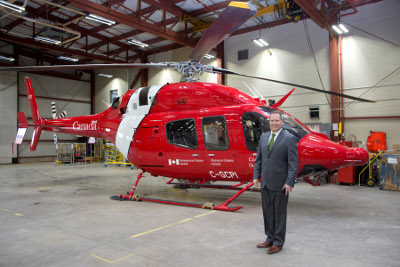 Bell Helicopter Textron Canada has delivered the last of 15 light-lift helicopters to the Canadian Coast Guard, ahead of schedule and within budget.

The delivery is part of a contract signed between the parties in May 2014.

Twelve helicopters have already been deployed into service across Canada and are based at Canadian Forces Bases located in Shearwater, Nova Scotia, to carry out Canadian Coast Guard missions.

Shearwater will receive an additional helicopter later this month. The remaining three helicopters at the base are currently being used to train pilots, but will be deployed to their operational bases shortly.

The new light-lift helicopters are faster and can fly long range missions and feature a wide range of safety enhancements over the existing aircraft. They have the ability carry greater payload than the aircraft they are replacing.

The Canadian Coast Guard’s helicopters fleet will offer its support and assistance to a variety of programmes like safety, national security and sovereignty of Canada.

The new helicopters missions would include from flying to remote sites in Canada to supporting construction and maintenance of CCG communication sites, ice monitoring and support to DFO Science programmes.

Canadian Coast Guard Oceans and Fisheries Minister Hunter Tootoo said: "These made-in-Canada light-lift helicopters are faster, safer, more reliable and more efficient than the models they are replacing. By renewing the fleet of helicopters, our Government is providing the women and men of the Coast Guard with the modern equipment they need to better serve Canadians."