Shikishima (PLH 31) is the lead ship in the class of two Shikishima patrol vessels.

The Shikishima Class ships are the largest patrol vessels in the world. Image courtesy of Hunini 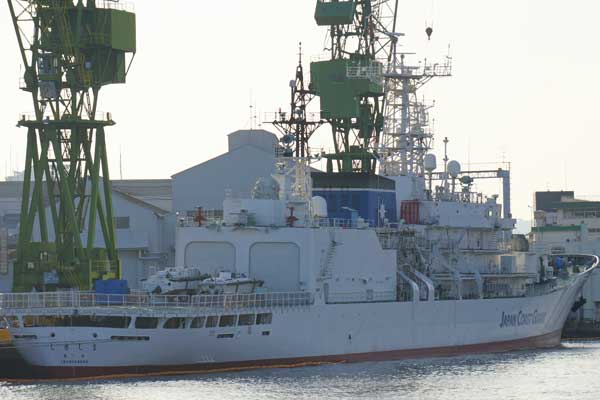 The Shikishima Class patrol vessels of the Japan Coast Guard (JCG) are the largest patrol vessels in the world. The two vessels were built by Ishikawajima-Harima Heavy Industries (IHI) shipyard.

The Shikishima patrol vessel entered service with the JCG in 1992. The vessel was initially deployed to escort plutonium transport ships travelling from Europe to Japan, and was subsequently used for patrol missions by the Yokohama Maritime Safety Department. The vessel frequently sails to south-east Asia to bolster international efforts against piracy in the Strait of Malacca. It can sail from Japan to Europe without making a port of call.

IHI received a contract from the JCG in 1989 to deliver a patrol vessel with a capability to accommodate two helicopters. The keel for the vessel Shikishima (PLH 31) was laid in April 1990. The vessel was launched in June 1991 and commissioned into the JCG in April 1992.

The Shikishima Class incorporates a mono-hull design offering a large deck area. The ship is equipped with anti-air capabilities, unlike other coast guard vessels of Japan. The long-range cruising capability combined with its superior firepower makes the vessel ideal for long-range patrols and escort missions.

The vessel has a length of 150m, beam of 17m, and draft of 10m. The gross tonnage of the ship is 6,500t. The Shikishima Class can carry a maximum of 140 crew, including the ship company and air crew. Accommodation facilities are provided for the crew members.

DCNS signed a contract with IHI Marine United (IHIMU) in October 2011, to supply a SAMAHE helicopter handling system for the Akitsushima patrol vessel. The system was earlier installed onboard the Shikishima vessel. DCNS supplied a special dual variant of the SAMAHE system, including two rails extending from the hangars to the landing area.

"The ship is equipped with anti-air capabilities, unlike other coast guard vessels of Japan."

The SAMAHE handling system designed for surface ships allows the operation of a helicopter on the flight deck, even in high sea states. The system evens out the motion of the ship to fully protect the helicopter, crew and the ship. It is fitted between the landing grid and the hangar. The system ensures safe movement of the embarked helicopter between the landing spot and the stowage area.

The Shikishima Class is powered by two IHI-SEMT-Pielstick 16 PC2.5 V400 diesel engines. The engines drive two controllable pitch propellers through a pair of shafts. The vessels are also equipped with a bow thruster for high manoeuvrability. The propulsion system provides a maximum speed of 25kt.

The Shikishima Class vessels have a maximum range of 20,000nmi.