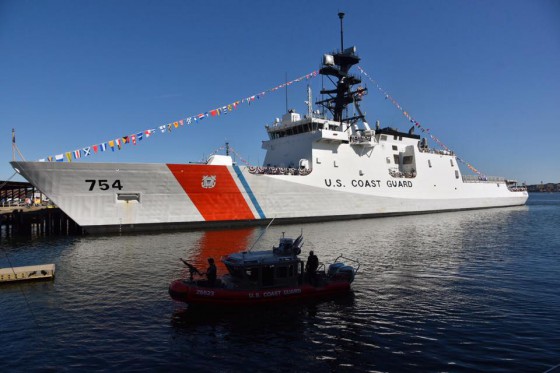 The US Coast Guard (USCG) has commissioned the fifth National Security Cutter (NSC), James (WMSL 754) during a ceremony at its Base Boston in Massachusetts, US.

Built by Huntington Ingalls Industries’ (HII) Ingalls Shipbuilding division, the cutter is scheduled to be homeported in Charleston, South Carolina.

The Legend-class NSCs are primarily aimed at replacing 378ft Hamilton-class High-Endurance Cutters commissioned during the 1960s.

The vessel is named after Joshua James, one of the most celebrated lifesaver in the USCG’s history, credited with saving hundreds of lives throughout his career.

"What better namesake for a ship and crew that will serve our Nation with pride for the next half century saving lives, stopping smugglers, maintaining safety and security in the Arctic and wherever national objectives may require."

The 418ft-long and 54ft-wide vessels incorporate an aft launch and recovery area for two rigid hull inflatable boats and a flight deck to house diverse manned and unmanned rotary wing aircraft, and offer a displacement capacity of 4,500t with a full load.

Complying with all the maritime security mission requirements, the vessel can accommodate 110 crew members, while cruising at a maximum speed of 28k and a range of 12,000 miles, and has an endurance of 60 days.

The NSCs are claimed to be the largest and most technologically advanced class of cutters in the Coast Guard, and would enhance the service’s operational readiness, capacity and effectiveness.