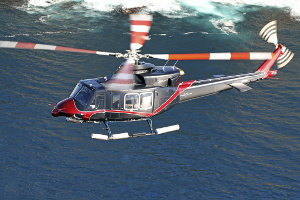 It is powered by Pratt & Whitney PT6T-9 Twin Pac engines that offer 15% more horsepower than its predecessor and are fully-supported in Japan.

Bell Helicopter Japan managing director Richard Thornley said: "The Bell 412 is known around the world for its rugged reliability to perform the toughest of missions, and the new EPI offers improved performance with a state-of-the-art integrated avionics suite that improves situational awareness and reduces pilot workload.

"We are incredibly pleased that Aomori Prefecture has chosen the Bell 412EPI – which continues the long legacy of Bell helicopters being used for life-saving missions in Japan."

The BLR Strake and FastFin system modifies the tailboom to optimise airflow and improve handling, safety and lift.

Since its launch in 2013, the Bell 412EPI has been attracting interest from international customers, including the Canadian Coast Guard who recently signed an agreement to acquire seven of the aircraft.

The helicopter is expected to join Aomori Prefecture’s Firefighting and Disaster Prevention Agency’s fleet in early 2016.

Aomori Prefecture was also the first Japanese customer to take delivery a Bell 412EP helicopter at the start of its helicopter operations in 1995.