The UAV can fly at a maximum speed of 140km/h. Copyright Saab AB. 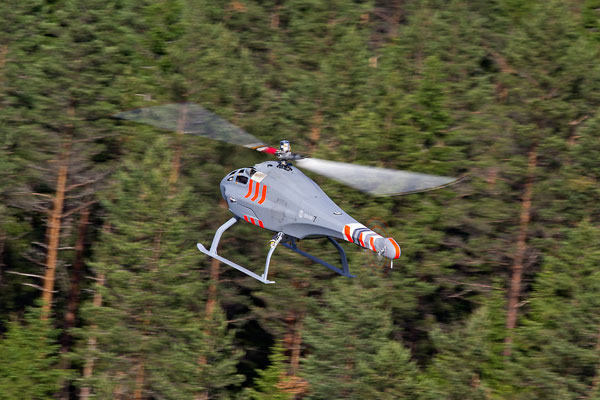 The UAV’s quick flight capabilities provide the police and border control units with real-time image intelligence at long and short ranges for gaining situational awareness. The performance characteristics of the UAV ensure flight near danger zones or targets of interest with better stand-off range.

The capabilities of Skeldar V-200 UAV were successfully demonstrated during a series of tests conducted in the US and Sweden. The system can be qualified for all airspace classifications.

S4 Ehécatl is an unmanned aerial vehicle (UAV) manufactured by Hydra Technologies, a company based in Mexico.

The UAV has an overall length of 5.1m and height of 1.3m. The airframe length excluding the rotor is 4m. The maximum take-off weight of the vehicle is 235kg. The main rotor blades are easily detached or attached while the tail weighing less than 10kg can be removed from the airframe within five minutes for easy transportation and storage. The system is housed in 20ft-long ISO containers for long range and overseas transportation.

The UAV is offered with a range of Commercial Off-The-Shelf (COTS) payloads for the collection and dissemination of data. Its open architecture with dual payload capability allows rapid integration of future payloads.

The fully autonomous flight of Skeldar is complemented with onboard avionics including a redundant flight control computer, GPS receivers, Inertial Navigation Systems (INS), a radar altimeter and an air data system. The fly-home and safe landing modes further enhance the safe operation of the system.

The capability to employ various data link systems using UHF, L- or S-band, C- or Ku-band frequencies ensures it to meet the mission requirements of customers on land or at sea. The UAV, using either dual command and control data link or sensor data link with low bit error rate, operates for a maximum range of over 100km.

The Skeldar V-200 UAS is fitted with a two-cylinder, two-stroke, liquid cooled internal combustion engine produced by Hirth Motors. The engine burning heavy fuel develops a power of 625cc at a constant 6,100rpm. It is also equipped with an electronic fuel injection (EFI) system developing about 58hp.

The complete Skeldar system constitutes two aerial vehicles, and a mobile UAV Control Station (UCS) complying with STANAG 4586 standard. The control station can be incorporated in any land-based vehicle platform. The single operator mission computer display allows the control and handling of payload and mission. The UAV is operated from the control station on the basis of point-and-fly and point-and-look principle.

The UCS also features redundant flight computers with built-in flight panels to control and monitor the UAV missions. The UAV system requires a minimum of two crew including one operator and a mechanic. The control station is also available with dual operator interface.

The Skeldar civil security UAV can fly at a maximum altitude of over 3,500m (11,500ft). It has a maximum speed of 140km/h and can endure airborne for six hours. It can conduct missions within a radius of more than 100km.