KV Svalbard is an icebreaker / OPV in service with the Norwegian Coast Guard. Image courtesy of Marcusroos.

KV Svalbard can be operated in icy waters with ice thickness of up to one metre. Image courtesy of Lkarsten. 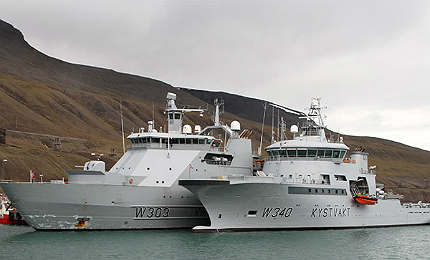 KV Svalbard is an icebreaker and offshore patrol vessel (OPV) operated by the Norwegian Coast Guard. It is the first Norwegian coast guard vessel with ice-breaking capabilities. The vessel was designed and built by Aker Yards, Langsten.

"The vessel is primarily deployed in the Arctic waters north of Norway, the Barents Sea and the coastal waters of Svalbard."

The vessel is primarily deployed in the Arctic waters north of Norway, the Barents Sea and the coastal waters of Svalbard. It is capable of operating in ice thickness of up to one metre. KV Svalbard complements three Nordkapp Class patrol vessels of the Norwegian Coast Guard.

KV Svalbard is based at Sortland. The vessel can conduct maritime patrol and search and rescue operations, while it also provides support for research activities in the Arctic Ocean.

The vessel took part in the programme of the Norwegian IPY 2007-2008 – Integrated Arctic Ocean Observing System – Norway (iAOOS-Norway) in 2007. The programme is an integrated, research-oriented interdisciplinary analysis of different parameters and processes in the Arctic Ocean.

The keel for KV Svalbard (W 303) was laid down at Tangen Verft shipyard in Kragerø in August 2000. It was launched in February 2001 and christened in December 2001. The ship was delivered to the Norwegian Coast Guard in January 2002.

Design of the Norwegian icebreaker

KV Svalbard has an overall length of 103.7m, beam of 19.1m and design draft of 6.5m. The length between perpendiculars is 89m. The ship has a displacement of 6,375t, which makes it the biggest naval vessel in the fleet of Norwegian Armed Forces. It can complement more than 48 crew members.

Equipment and systems onboard KV Svalbard

KV Svalbard is equipped with real-time ice load monitoring system. The system employs fibre-optic sensors to measure shear stress on the hull. The data is processed and displayed on the bridge.

The real-time ice load information eliminates the risk of hull damages. The system provides data of acceptable loads, borderline loads or overloads to the bridge. The route selection is optimised using electronic charts integrating meteorological and satellite data about the ice conditions.

The main gun fitted on the bow deck is a Bofors 57mm dual-purpose naval gun. The gun can fire at a rate of 220 rounds per minute. It can effectively engage targets within the range of 8,500m. The gun can protect the ship from sea skimming anti-ship missiles, small, fast-manoeuvring naval craft and aerial targets.

KBV 001 Poseidon is the lead ship in the combination carrier series of three multipurpose vessels operated by the Swedish Coast Guard (Kustbevakningen).