The KBV 001-003 series multipurpose vessels are in service with the Swedish Coast Guard. Image courtesy of Jonn Leffmann.

The Damen MPV 8116 design served as a basis for the KBV 001 Poseidon multipurpose vessel. Image courtesy of Marcusroos.

A bow side view of the KBV 003 Amfitrite multipurpose vessel. Image courtesy of Boatbuilder.

The KBV 001 Poseidon multipurpose vessel arrives at its homeport Gothenburg for commissioning into the Swedish Coast Guard. Image courtesy of Bengt Oberger. 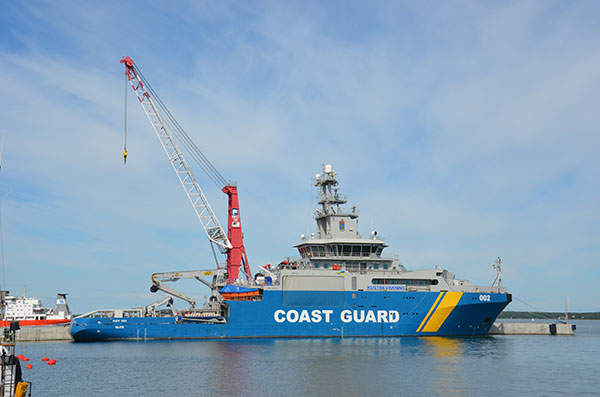 The KBV 002 Triton hoists its main crane with the lifting capacity of 24t. 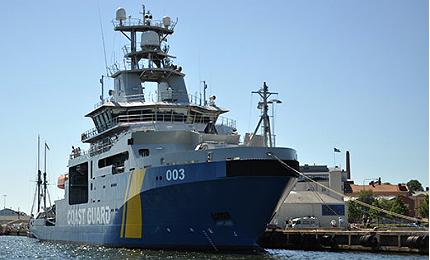 KBV 001 Poseidon is the lead ship in the combination carrier series of three multipurpose vessels operated by the Swedish Coast Guard (Kustbevakningen). The other ships in the class include KBV 002 Triton and KBV 003 Amfitrite. Built by Damen Shipyards, the three ships are the largest vessels in the Swedish Coast Guard’s fleet.

"Built by Damen Shipyards, the three ships are the largest vessels in the Swedish Coast Guard’s fleet."

The vessels were built by Damen Shipyards Galati (DSGa), in association with Damen Schelde Naval Shipbuilding (DSNS) and Damen Shipyards Gorinchem (DSGo). The keel for the first ship in class, KBV 001 Poseidon, was laid down in March 2007. The ship was launched in February 2008 and delivered in June 2009.

The design of the KBV 001 Poseidon is based on that of the Damen MPV 8116 patrol and emergency response vessel. The Poseidon integrates a double hull and bottom.

The vessel’s design-platform can be modified to meet the customer-specific requirements. The vessels are certified under Ice Class 1A to operate in northern Baltic ice conditions or similar areas.

The deck-layout of the vessel houses cranage, oil recovery system, oil booms, skimmers, fast craft, life boats and towing winch. The 24t main crane can reach up to a distance of 21m. The deck is also mounted with two auxiliary cranes and a store crane.

The rescue and life saving equipment include a 10.5m fast tender craft, a 7.5m fast rescue craft and a 50-person lifeboat. The ship is also equipped with a citadel. The fire fighting systems consist of two fire fighting guns and a foam gun.

"The design of the KBV 001 Poseidon is based on that of the Damen MPV 8116 patrol and emergency response vessel."

The navigation and communication to the KBV 001 Poseidon is provided by an X-band radar, an S-band radar, a DP1 dynamic positioning system and an Area A4 Global Maritime Distress and Safety System (GMDSS).

The dynamic positioning system and other state-of-the-art systems aboard the vessel further enhance the station keeping capabilities. These systems allow the vessel to maintain a fixed position and heading under Force 7 conditions.

The vessels are equipped with a retractable bow thruster and a resilient mounted tunnel thruster for high manoeuvrability. The auxiliary power is provided by a 452kW C18 generator. The ships are also equipped with a 240kW 3406C emergency gen set.

The propulsion system provides a maximum speed of 16kt. The vessels consume less fuel and are equipped to recover extensive energy from waste heat. The onboard exhaust gas systems with special urea reactors reduce NOx emissions.