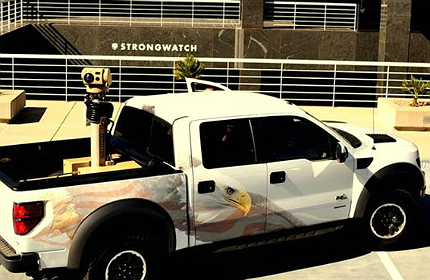 The FREEDOM On-The-Move (FOTM) is a Mobile Video Surveillance System (MVSS) manufactured by Strongwatch Corporation. The system is intended for use by military, border security and law enforcement agencies.

The FOTM system is based on the gyro-stabilised surveillance system developed in 2010 for the US Armed Forces deployed in Afghanistan. The new system will support the force protection, anti-ambush, counter sniper, border security, port perimeter security, drug interdiction, covert surveillance and law enforcement missions.

Strongwatch plans to offer the FOTM system for the Department of Homeland Security’s recent request for proposal, calling for the acquisition of MVSSs, which are to be mounted on the United States Border Patrol (USBP) 4×4 vehicles.

General Dynamics Information Technology (IT) entered into a collaboration agreement with Strongwatch in June 2013 to provide training and logistics services, as well as maintenance support for FREEDOM On-The-Move for the US border security.

"The system is intended for use by military, border security and law enforcement agencies."

The FOTM is an easy-to-operate modular surveillance system. The open architecture of the FOTM integrates Commercial Off-The-Shelf (COTS) components. The modular design of the system allows customisation according to the mission requirements. The FOTM system complies with the MIL-STD-810 requirements.

The system can be mounted on pneumatic, hydraulic and electric masts aboard a truck, tactical vehicle, off-road vehicle, SUV and a marine platform. The popular mast design adopted is the Tactical Mast Deployment System (TMDS). The mast can be installed on Covert Bed Mount System (CBMS).

The CBMS allows the rapid mounting / dismounting of FOTM, and also ensures folding of the system for storage.

The FOTM system also withstands shock and vibration during the movement and can resist extreme terrain and climate conditions.

Command and control of the Mobile Video Surveillance System

The FOTM system can be controlled by a standardised (Xbox) hand controller unit (HCU) featuring a rugged visual display. Commands and functions are executed from the cab of the vehicle without the need for a dedicated operator.

"The modular design of the system allows customisation according to the mission requirements."

The cab controller also allows the application of third-party software, including human sensing and trailing software, as well as facial and license plate recognition capabilities.

The system can be remotely operated using a TCP/IP connection. It can transfer video and images to remote observers through wireless mesh network.

Sensors on the Freedom-On-The-Move MVSS

The four polarity modes of IR display ensure detection of threats in all types of environments and weather conditions during day and night. The IR camera sensor offers up to 4x zoom in wide and narrow field of view (FOV) modes.

The second sensor of FOTM is a CCD colour camera offering 26x uninterrupted optical zoom and additional digital zoom. The optically matched FOVs of the two cameras allow the operator to rapidly shift between the two sensors, while retaining the image quality of the point of interest. The low-light capability of the CCD sensor extends the operations into dawn and twilight.

The in-built laser range finder (LRF) with a GIS overlay capability ensures the acquisition of precise range and grid coordinates on targets.

The system can be integrated with a night vision goggle (NVG) compatible laser designator and illuminator enabling the operator to blush points of interest for friendly forces.

How the system is powered

The common power consumption of the FREEDOM On-The-Move system is 18VDC to 32VDC at 40W average draw. It consumes 100W power when using heater in extreme cold weather conditions. The electricity is provided by a deep cycle marine battery that can be charged by generator or electrical system of the vehicle. Once fully recharged, the independent power supply enables the FOTM system to operate non-stop for up to eight hours.

The Nationwide Automatic Identification System (NAIS) is one of the strategic C4ISR assets of the US Coast Guard.