The AW139 multirole helicopter allows the entry and exit of the troops from both sides through two large sliding doors. Image courtesy of karaya69.

An AW139 multirole helicopter of the US Customs and Border Protection operates in conjugation with two Midnight boats. 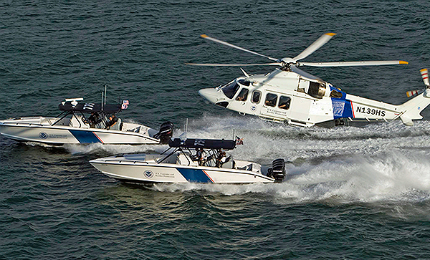 AW139 is a medium, twin-turbine, multirole helicopter manufactured by AgustaWestland. The helicopter was originally developed under the name AB139 by Bell / Agusta Aerospace, a joint venture between Bell Helicopter Textron and AgustaWestland.

The AW139 helicopter is widely operated by civil, military, law enforcement and homeland security agencies across the world.

AgustaWestland launched the AW139M helicopter in February 2011, to meet the specific needs of military, homeland security and government customers. The AW139M is a militarised variant of the AW139 helicopter.

The AW139 helicopter has been recently ordered by JNPA (two helicopters) in March 2013, Swedish Maritime Administration (seven) in November 2012, the Royal Thai Army (two) in October 2012 and Maryland State Police (three) in July 2012.

"The AW139 helicopter is widely operated by civil, military, law enforcement and homeland security agencies across the world."

The AW139 helicopter features largest passenger cabin in its class. It can accommodate up to ten fully equipped troops or 15 passengers. The unobstructed cabin provides internal access to a large baggage compartment.

The AW139M helicopter carries a wide range of weapon systems based on the mission requirements. The helicopter can be armed with 12.7mm sniper rifle and 7.62mm and 12.7mm machine guns for law enforcement and homeland security roles. The battlefield support helicopters can also carry heavy machine guns, 70mm air-to-ground rockets and air-to-surface missiles.

The modular armour in cockpit and cabin protects the crew and occupants. The survivability of AW139M is further enhanced by energy-absorbing landing gear and self-sealing crash-worthy fuel tanks.

"The helicopter can be armed with 12.7mm sniper rifle and 7.62mm and 12.7mm machine guns for law enforcement."

The countermeasures against incoming missiles are provided by the Missile Approach Warning System (MAWS) and Counter Measures Dispensing System (CMDS). The AW139M helicopter can also be fitted with identification, friend or foe (IFF) and Blue Force Tracker combat identification technology.

The AW139M can fly at a maximum cruise speed of 306km/h. The maximum certified service ceiling of the helicopter is 6,096m.

Forecast spending for 2012 has been lowered as government officials confirm the UK will pull out of Afghanistan by 2014.EC135 is a multimission twin-engine helicopter manufactured by Eurocopter.