Turva is a next generation Offshore Patrol Vessel (OPV) ordered by the Finnish Border Guard. Image courtesy of STX Europe.

A close view of the Turva Offshore Patrol Vessel (OPV) during its naming and launching ceremony. Image courtesy of STX Europe. 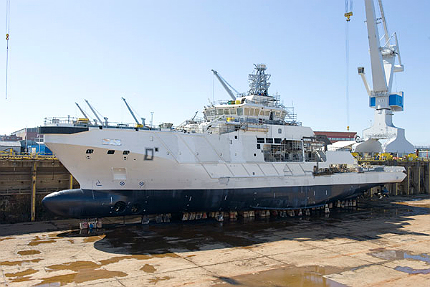 Turva is a next generation Offshore Patrol Vessel (OPV) being built by STX Finland for the Finnish Border Guard. The new OPV is intended to perform maritime patrol missions in the Gulf of Finland to ensure the border safety and coastal defence of Finland.

The patrol vessel will be equipped with the mission capability for conducting operations in Baltic Sea ice conditions.

It will also be deployed in secondary missions such as Search and Rescue (SAR), national defence, prevention of environmental damage, oil spill response and emergency towing.

STX Finland began the construction of the next generation offshore patrol vessel with the steel cutting ceremony in October 2012. The keel of the OPV was laid at Rauma Shipyard in February 2013. The indigenous content of the vessel is estimated to be 90%.

The vessel was named "Turva" during a christening and launching ceremony in August 2013. The name of the vessel was selected through an open ship naming competition.

The Turva OPV is scheduled to be delivered to the Finnish Border Guard in November 2013.

"The patrol vessel will be equipped with the mission capability for conducting operations in Baltic Sea ice conditions."

Turva OPV is an advanced patrol vessel incorporating rigid hull and systems to perform maritime operations in challenging environments. It will be equipped with the capability to safely operate in different accident situations.

The emergency towing capability of Turva will ensure the rescue of disabled vessels on the sea. The vessel will also feature its own damage control mechanism for managing its operational capacity.

The advanced offshore patrol vessel will have a length of 95.9m, beam of 17.4m and design draught of five metres. The dead weight of the vessel at maximum draft will be 1,800t. The OPV will complement about 30 crew members.

The vessel will have storage tanks for holding 1,000m³ of recovered oil and 200m³ of chemicals. It can carry nine 20ft containers and can accommodate a tender boat. The flight deck can accommodate a medium-sized helicopter.

The ship will also act as a refuelling station for SAR helicopters to complement extended rescue operations.

Sensors aboard Finland’s next generation OPV

The Turva OPV will act as an on-scene command platform for managing critical missions. It will be equipped with extensive sensor equipment to monitor the sea area in all visibility conditions.

The Cassidian TRS-3D multimode naval radar aboard the vessel will provide accurate air and sea surveillance information even in extreme climatic conditions.

The TRS-3D radar can automatically detect, track and classify small, fast and low-flying aircraft, missiles, helicopters and vessels within the range of 200km.

"The ship will also act as a refuelling station for SAR helicopters to complement extended rescue operations."

The engines can alternate among fuels without the loss of power or speed. Each engine will develop a maximum power of 5,400kW at 750rpm.

Turva is the first OPV to feature this type of propulsion configuration, which is intended for icebreakers and ice-going LNG carriers.

The vessel will also be equipped with two bow thrusters for high manoeuvrability and dynamic positioning. The bollard pull capacity of 100t provides the ability to tow the largest tanker vessels operating in the Baltic Sea. The propulsion system provides a service speed of 18kt.

The Response Boat-Medium (RB-M) is manufactured by Kvichak Marine Industries, and Marinette Marine Corporation of Fincantieri Marine Group (FMG), for the US Coast Guard (USCG).