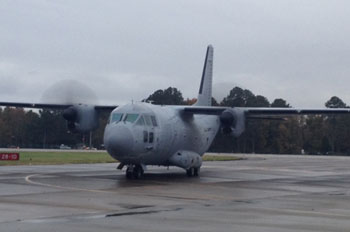 The US Coast Guard (USCG) has received its first C-27J Alenia Aermacchi C-27J aircraft, which has successfully completed the agency’s regeneration process.

The aircraft, which is one of the 14 being transferred from the US Air Force, will now be deployed to train and succeed Coast Guard aircrew and maintenance personnel, in addition to building flight and maintenance processes for Coast Guard-specific mission profiles.

Eventually, the C-27J will also be installed with equipment and systems required to execute a range of Coast Guard missions.

As part of the regeneration process, which involves flight clearing of aircraft that are deactivated from long-term preservation, personnel probed the aircraft’s history; confirmed the configuration details and formulated the deployed parts; executed wide inspections and requiredmaintenance actions; followed by a functional check flight at the end.

Further, the second aircraft is set for completing regeneration before 2014, followed by other two by mid-next year.

The US Coast Guard also revealed plans to integrate all the 14 planes with mission kits to include surface-search radars, electro-optical sensors and mission suites, in a bid to bolster the aircrafts’ capabilities.

Upon being deployed, the aircraft will assist in performing medium range surveillance USCG missions such as maritime patrol, drug and migrant interdiction, disaster response, and search and rescue.