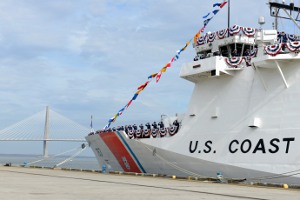 Now, the vessel together with its crew members will undergo additional training and certification until it sets out to carry out maritime law enforcement missions across the Western Hemisphere next year.

Constructed by Huntington Ingalls Industries’ (HII) Ingalls Shipbuilding division, the fourth Legend-class NSC was delivered to the USCG in mid-September, upon the successful completion of acceptance trials.

The new 418ft-long and 54ft-wide NSCs are aimed at replacing the USCG’s ageing fleet of 378ft Hamilton-class High-Endurance Cutters commissioned during the 1960.

Capable of cruising at a maximum speed of 28k, the new vessel boasts a displacement capacity of 4,500t when fully loaded and offers a range of 12,000 miles.

In addition to accommodating 110 crew members, the vessel can patrol more than 90 days, while complying with all the maritime security mission requirements of the High-Endurance Cutter.

The new NSC also integrates an aft launch and recovery space for two rigid hull inflatable boats and a flight deck for a range of manned and unmanned rotary-wing aircraft.

The USCG has already taken delivery of four NCSs, with three more being built and construction on the seventh NSC, Kimball (WMSL 756), set to start by early next year.