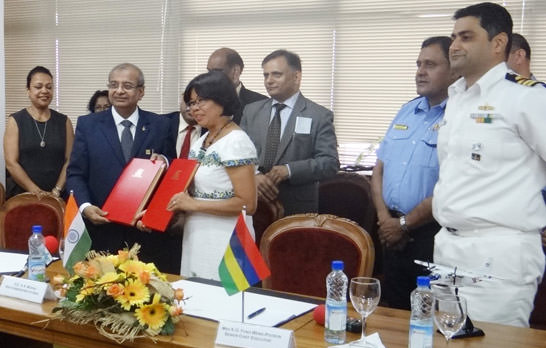 The Mauritius Government has signed a contract with India’s defence PSU HAL for the procurement of Dornier aircraft, in a bid to bolster its maritime surveillance across its extensive coastline.

HAL chairman Dr RK Tyagi said: "Thanks to the support of the Ministry of Defence (MoD), External Affairs, our Coast Guard, and Government of Mauritius, this contract worth nearly Rupees 100 crores (USD 16 million) gives boost to our export efforts."

Further, the procurement of Dornier would enable the Mauritius’ National Coast Guard and Mauritius Police Force to bolster their present search and rescue capability and deliver strategic depth to policing the extensive Exclusive Economic Zone (EEZ).

Integrating a retractable tricycle landing gear and duplicate controls, HAL’s maritime aircraft can accommodate two crew members, while can even have room for 19 passengers in commuter configuration.

Image: HAL and the Government of Mauritius officials during the signing of the deal. Photo: courtesy of Hnidustan Aeronautics Limited.