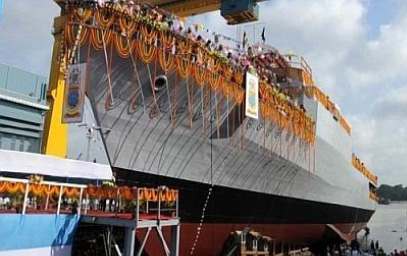 Indian defence shipbuilder Garden Reach Shipyard & Engineers (GRSE) has delivered the ‘CGS Barracuda’ offshore patrol vessel (OPV) to Mauritius, in what is claimed to be India’s first warship being exported.

India Minister of State for Defence Rao Inderjit Singh told PTI: "This is the first time that the export barrier has been breached.

"This would be the first among the long line of ships that we hope to export to various parts of the world."

The latest delivery follows the successful completion of month of sea trials during which it cruised at a maximum speed of 22.5k, compared to the customer’s constraint of 20k.

The $58m, 1,300t OPV can be deployed for anti-piracy, anti-smuggling, anti-poaching, search and rescue and other missions.

Integrating a first for its class feature- a pollution control suit that can be used to deal with oil-spills, the new OPV will be deployed to police Mauritian waters, which is spread over 1.9 million square km.

The Barracuda has another feature that is a first for its class – a pollution control suit that can be used to deal with oil-spills.

GRSE chairman and managing director rear admiral AK Verma said that they have also been receiving enquires for the construction of similar ships for other nations.

Verma added: "After our modernisation we have increased our capacity to meet the requirements of our defence forces without overrun in time and cost.

Together with GRSE, which has built 92 warships for the Indian Navy and Coast Guard, Goa shipyard has also received orders from Sri Lanka for building OPVs.