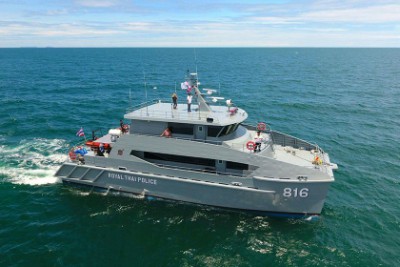 The two patrol boats were built by Seacrest Marine, a Bangkok-based company.

The platform has demonstrated superior operating characteristics in service and was identified as capable of meeting the mission demanded by the Royal Thai Police.

Ratayapibanbancha and Arcarachwaratorn have been built on the lines of Reef Ranger, which has been designed and developed by Incat Crowther and is serving as a patrol boat on Australia's Great Barrier Reef since 2014.

A large aft working deck accomodates a 4.5m fast rescue craft, forward of which is the main deck cabin.

The cabin comes with completely-featured galley to starboard and a wet room to port. Forward of the hull access are two large rooms, one a dormitory for eight crew, the other a large mess and dining space.

The two boats will conduct several functions under the jurisdiction of the Royal Thai Police.

The vessels have been configured to be versatile and fully-featured, including comprehensive communication equipment and office facilities.

They are powered by twin MAN 12V D2862 main engines, each producing 1213kW and feature Humphree interceptors. These vessels can move at a speed of 34 knots and have a cruise speed range of 1,000 miles.