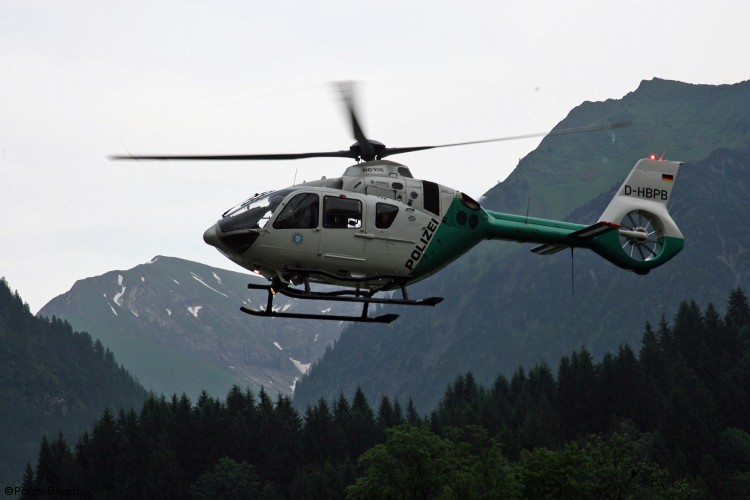 The company is under contract to upgrade the law enforcement agency’s eight helicopters to the H135 standard, which improves the rotorcraft’s operating performance and handling qualities, while retaining its best-in-class payload lift capabilities.

The upgraded helicopters have already been deployed on a variety of missions in the police fleet’s range of tasks in the past few weeks, including the recent G7 summit in Bavaria.

The retrofit package, which brings earlier production EC135 models to H135 standard, included an enlarged main rotor with improved blade profiles, the transfer of front-mounted engine air intakes to a lateral position, augmented engine capacities and an extension of the horizontal stabilizer’s span and removal of its endplates.

Apart from this, the helicopter’s tail skid was replaced with a mini bumper.

Airbus Helicopters H135 programme head Axel Humpert said: "Besides the considerable improvements in performance and handling, the latest H135 continues to lead the market of its class in payload and low operative costs.

"In addition to the improved handling and yaw control, the upgrade also effects a lower noise footprint – resulting from the increased rotor diameter."

According to the company, the helicopter’s higher power margins, its one-engine-out performance and expanded flight envelope will be appreciated by all customers, especially those who perform mountain rescue and missions in hot temperatures, adverse weather or at night.

The remaining five helicopters are scheduled to be converted at Airbus’s production facility in Donauwörth, Germany, and be delivered to the agency in the next few months.

Airbus is showcasing the H135 helicopter at the ongoing Paris Airshow in France.