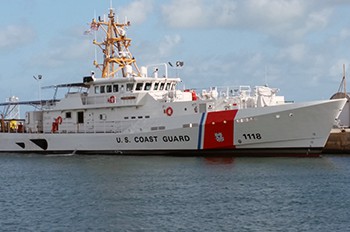 It will be the sixth FRC stationed in San Juan, Puerto Rico, and is scheduled for commissioning in August this year.

The 18th FRC has been named in honour of Joseph Tezanos, a petty officer second class, who saved more than 40 people after an explosion took place on landing ship tank at Pearl Harbor, Hawaii, on 21 May 1944.

Tezanos received Navy and Marine Corps Medal and a Coast Guard commendation letter from the commandant for his bravery.

The 154ft-long FRCs are designed and built based on Damen Stan Patrol Boat 4708. The USCG is acquiring 58 FRCs to replace the 110ft-long Island-class patrol boats.

Capable of reaching speeds of up to 28k, the FRCs are equipped with advanced command, control, communications and computer technology, intelligence, surveillance and reconnaissance equipment, and a stern launch system for the vessel’s 26ft cutter boat.

Of the 38 FRCs ordered, 17 are in service: six in Miami; six in Key West, Florida; and five in San Juan.