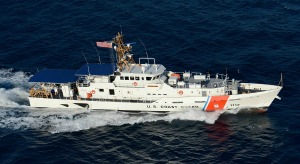 American builder Bollinger Shipyards has received a new contract to construct Phase II of the Sentinel-class fast response cutters (FRCs) for the US Coast Guard (USCG).

The FRC, which is the newest generation of USCG patrol cutters, is a replacement for the Island-class cutters developed by Bollinger over the last three decades.

"Our relationship with the Coast Guard began over 30 years ago and we are proud to continue building on that legacy. This is a testament to the skilled Louisiana based team of Bollinger employees."

Bollinger Shipyards will build between 24 and 58 Sentinel FRCs based on the company’s Damen Stan 4708 patrol vessel design.

The new FRC is integrated with latest command, control, communications and computer technology, in addition to a stern launch system for the vessel’s 26ft cutter boat.

Designed to bridge the capability to comply with the potential mission requirements, the vessels can support missions such as maritime homeland security, search and rescue (SAR), fishery patrol and national-defence missions.

Capable of accommodating a crew of 22, the ship can deploy rigid-hull inflatable boats (RHIB) for conducting rescue and interception missions.