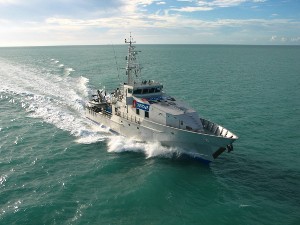 The Australian Government has gifted the first of two Austal-built Bay-class patrol boats to the Malaysian Maritime Enforcement Agency (MMEA), during an event held in Port Klang, Malaysia.

The first 38m-long Bay-class patrol boat, previously the ACV Arnhem Bay, was delivered to the MMEA in February while the second vessel is scheduled to be delivered in April or May this year.

Austal international sales and marketing vice-president Dave Shiner said: "The Austal designed and built Bay-class vessels are robust and cost effective patrol boats that have provided outstanding service to the Australian Customs and Border Protection Service (ACBPS) over their first 15 years of life.

"Their proven ability to meet the challenges of search and rescue in rough weather conditions around Australia means they will be an excellent addition to the MMEA fleet.

A total of eight Bay-class patrol boats were delivered by Austal to support the ACBPS’s missions, including coastal surveillance, security and border protection activities, throughout Australia’s waters.