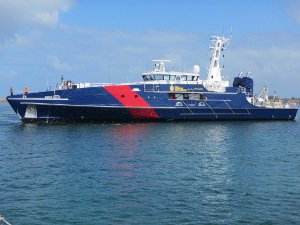 The latest launch forms part of a $330m contract to design, build and support eight 56m-long CCPBs for the ACBPS signed in August 2011.

Austal Australia president Graham Backhouse said: "The launch of Cape Jervis, on time, in accordance with a demanding production schedule is great testament to the productivity and efficiency of our workforce.

"Achieving these timeframes is only possible through combined efforts and close collaboration with the Commonwealth and our industry partners.

"The efficiencies gained through the CCPB Program reinforce Austal’s strategy of being a competitive global Defence Prime Contractor that designs and constructs ships, integrates systems and provides ongoing through life support 24/7."

The vessels are capable of carrying an increased crew to more effectively and safely manage boarding operations and launch two tender response vessels at the same time.

Further, the patrol vessels would bolster capability to operate in more severe sea conditions and across longer range.