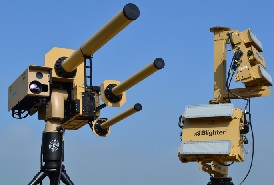 API Technologies has partnered with Blighter Surveillance Systems to support the latter in the production of its latest radar, the BlighterA400 series.

The Blighter A400 series Ku band Doppler air security radar is designed to detect small and medium sized unmanned aerial vehicles (UAVs) or drones operating at a distance of up to 8km.

API has supported the Blighter Surveillance Systems programme since 2006, by providing a full range of engineering and product lifecycle support.

Blighter Surveillance Systems CEO Mark Radford said: "Having a strategic partnership with an established electronics manufacturing services (EMS) company – with a global footprint – is important as it enables us to scale up supply to meet growing worldwide demand.

"It also means that our engineers are freed up to work on design improvements of our core radar technology and to focus on systems integration.

"This was the case with the development of the Blighter A400 series radars which were designed to meet an urgent operational requirement by security forces to combat the growing threat from malicious micro, mini and larger UAVs/drones."

The radar solutions are currently used at Heathrow and other international airports, by the UK Army for force protection, and in numerous asset protection and border security applications, including monitoring the Korean Demilitarised Zone.