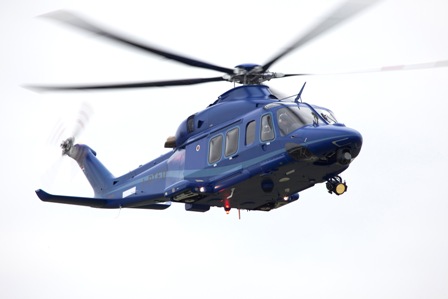 AgustaWestland has been awarded a contract by the Carabineros de Chile for an AW139 intermediate twin engine helicopter, as part of efforts to bolster the Carabineros’ mission capabilities.

Set for delivery in the first quarter of 2015, the AW139 will be deployed on a wide range of missions including public order and safety, crime control, counter terrorism, drug control and border security across the nation, search and rescue and transport.

The exceptional performance of the AW139, especially at high altitude and in high temperatures, will enhance the Carabineros’ mission capabilities.

Boasting a maximum cruise speed of 165k, the AW139 offers a maximum range of more than 570nm with auxiliary fuel.

AgustaWestland has bagged orders for more than 800 AW139 aircraft in over 60 nations covering more than 200 customers and with 700 helicopters already being commissioned.

The aircraft has already been deployed by several operators for homeland security, law enforcement and public utility applications across Chile, Brazil, the US, Italy, Japan, the Netherlands, Bulgaria, Oman, the UAE, and China.

The AW139 has also been used for offshore transport, EMS/SAR, executive/private and passenger transport, government and military tasks.