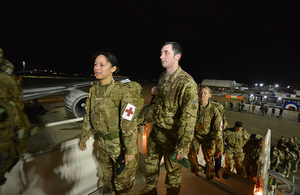 About 150 more UK Army personnel have left for Sierra Leone onboard a plane from the RAF Brize Norton, joining already arrived more than 300 soldiers, as part of joint Defence operation to support the UK Aid mission to tackle the Ebola epidemic in Africa.

Personnel include medics from 35 Squadron, 5 Medical Regiment of the Royal Army Medical Corps, in addition to troops from the Queen’s Own Gurkha Logistic Regiment and 1st Battalion The Royal Regiment of Scotland.

Upon reaching Sierra Leone, troops will operate the Ebola Training Academy and assist local healthcare workers and hygienists in protecting from infection and to prevent it from spreading to others.

General Officer Commanding Force Troops Command major general Tim Radford said: "This is the third group of soldiers who have deployed to Sierra Leone in support of the DfID operation to help tackle the crisis.

"They will join more than 300 soldiers who arrived over a month ago and have been instrumental in setting up the infrastructure and treatment facilities across the west of the country.

"These troops will form part of the group undertaking vital work to train Sierra Leonians to conduct community care in their own neighbourhoods in up to 1,000 centres across the whole country."