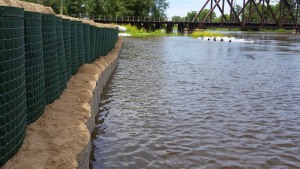 As Johnson County officials issued mandatory evacuation orders for residents in low-lying areas, HESCO flood barriers were deployed along the Mississippi River as part of the flood preparation efforts.

HESCO defensive barriers are renowned for keeping US soldiers in Iraq and Afghanistan safe when they are away from their homes and families and now HESCO flood barriers are protecting towns and business throughout America during flooding, tropical storms and hurricanes.

Constructed from wire mesh and lined with a special geotextile fabric, HESCO baskets are delivered flat packed and can be filled using virtually any locally available material, such as earth or sand. HESCO flood barriers have significant advantages over traditional sandbags in terms of speed and structural integrity. A typical wall of 1,500 sandbags can take ten persons up to seven hours to fill and build. The same length and height of wall using HESCO barrier products can be erected and filled with two persons and a standard front-end loader in just 20 minutes. With product strategically placed throughout the US, as soon as warnings are issued HESCO storm barriers can be deployed to protect critical infrastructure, businesses and homes immediately.